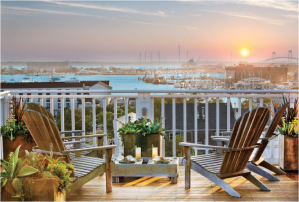 Someone recently asked me what season I thought was the best to visit Newport, Rhode Island. That is like asking a person which child they like better. Every day, every month and every season is a great one to visit this historical seaside city. Now where to stay…that is the real question to ask.

With so many great lodging options, I encourage you to look outside of the norm, which is exactly what I did during my recent trip. I visited the new Vanderbilt Grace on Mary Street, and experienced what life must have been like for the “blue bloods”.

One of the Vanderbilt lesser-known mansions is the hotel. It was built by Alfred Gwyne Vanderbilt in 1909 for his mistress. Certainly mistresses were nothing new for the uber-rich of this bygone era, but I feel certain that most did not have a mansion such as this. It was rumored that the mistress rarely stayed at the property (probably because Mrs. Vanderbilt lived nearby) and was inhabited by staff for many years. Alfred later died after an ill-fated business trip to Europe on the RMS Lusitania. He gallantly gave up his life vest to a woman, though he couldn’t swim. His heroic act is said to have spawned the phrase “women and children first”.

The Vanderbilt Grace is now expertly managed by Matthew Parent, a charming man perfectly suited for this special place. He explained the hospitality collaboration between the Grace Hotels Group, a Greek company with holdings that include some of the world’s most sumptuous properties, and US Hotels Group, which has equally wonderful American properties like Maine’s famous White Barn Inn, the new Asticou Inn in Northeast Harbor, Maine and The Windham Inn in Vermont. This collaboration guides the Grace into their first American hospitality holding.

Upon entering the hotel, I certainly “got it” – the luxury, extravagance and tasteful nod to its history. To the left of the main lobby is an extraordinary sitting room/parlor called The Christy Room. Warm and comfortable with a huge fireplace, this particular space certainly preserves the “Gatsbyesque” feel of the mansion, as well as the Beaux-Arts features. Watercolors and oil paintings line the cozy walls, as well as an exquisite oil painting on four panel screens. There is a large, breathtaking horseshoe staircase leading up to the 33 luxurious suites and rooms. On the top of the staircase is another sitting room with fabulous light from Clark Street. The light hits the chandeliers (which can be seen from the street) creating another little gem spot to meet friends or simply relax.

In addition to the most luxurious suites that I have ever seen, there is a rooftop deck that offers 360 degree views of beautiful old church steeples and roof lines of properties that date back to the earliest days in our nation, not to mention what I think may be the prettiest shoreline in the nation.

Next to one of the two restaurants sits a “Snooker Room”.  Now, how many times can you say you have played billiards in a real “Snooker Room”? Cocktails can be brought to you as you enjoy a game, slipping peacefully into another era.

In addition to the decor, there are other subtle nods to the historic and legendary owner, such as staff uniforms in blue and gold, which were the livery colors for the Vanderbilt’s.

The dining room was about to be refurbished when we visited and the vision will reflect the look of the beautiful era of refinement. The restaurant, called Muse, will be run under the direction of the legendary Jonathan Cartwright from the White Barn Inn in Maine. He is a Grand Chef at Realis & Chateaux and I expect that the dining experience will be as exciting as everything else that the Vanderbilt Grace has to offer.

Breakfast is served on the back porch overlooking the delightful outdoor space, fireplaces and flowers. Mimosas flow during the multi-course breakfast, yet none of it seems over the top in this setting.

There is an unexpectedly delightful indoor pool in the spa area. I say “unexpectedly” because it was a YMCA pool over 60 years after the family donated the property to Newport’s YMCA. Instead of filling in the pool and converting it to something more modern, the Grace organization decided to rehab it. The creative outcome is dramatic, and simply extends that feeling of stepping into an elegant era.

The spa, fitness center and outdoor pool are the most modern additions to the property, but do not stray far from the elegant nature of the property’s historic bones. All types of services that you would expect are offered and the staff is more than willing to discuss your individual needs beforehand.

The Grace organization purchased the Vanderbilt Grace from the city of Newport because they decided it could fit well with northern hemisphere plans. Well, if this is their first step into their North American expansion, I cannot wait to see what comes next!