Beautiful, inspiring and warm, Budapest, Hungary is certainly worth an investment of time and expense to visit.

Hungary’s capital city is full of vast contradictions. Perhaps it comes from being split in half by a natural boundary (the Danube River) or perhaps it is because it has survived two brutal occupations, but for whatever reason, the contradictions are many and most are wonderful.

In a story I wrote in our October issue about a Danube Uniworld River Cruise, I described sailing into Budapest as a pure delight. With the bends in the Danube heavenly placed before Budapest, the city just seems to open up to the river inch by inch. The cityscape with its amazing architecture, spanning centuries, just seems to perch upon the hills of Buda.

From the Buda side, the Pest side looks like any metropolitan city of the world, until of course, you notice the spires of 16th and 17th century churches mixed within the department store and restaurant facades. Pest is lively, hip and full of surprises. 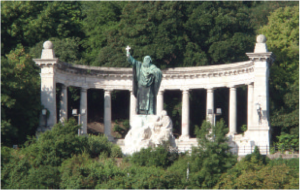 It seems all corners of Budapest are filled with notable statues, squares and buildings. Outstanding sites like Heroes’ Square features the historical equestrian statue complex called the Millennial Monument.

The Hungarian Parliament is an interesting side trip where I have to admit to feeling thrown back into a KGB era. The officials were watching each and every tourist VERY carefully and the stance they took was very KGB “esge” and quite intimidating. The building itself is reminiscent of the British Parliament building; the tour does provide unique and interesting facts to Hungarian government (past and present).

Architecturally, many consider Budapest to be a paradise. With must-see sites like St. Matthias Church, the beautiful Budapest Opera House, the Great Synagogue and many more, you are certain to see and feel the blending of old and modern as in most of Europe. The difference here, however, is the Turkish style baths and even a Roman Amphitheater that makes it truly unique. 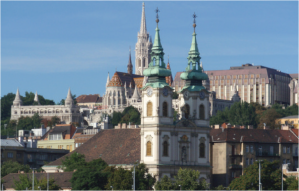 The most beautiful room view that we have ever had, and probably ever will have, was through the windows of our Budapest Hilton room. The view spanned castle walls and across to the Pest skyline, taking in the fantastic bridges that link the two halves of Budapest. Whether waking with the sun up or enjoying a glass of wine at sunset, the views were just stunning.

Your days in Budapest (referred frequently as “City of therapeutic waters”) can be spent lounging in the most wonderful healing mineral thermal baths. The spas/baths of Budapest are both very elegant and very practical. The baths that were recommended to us were in the Hotel Gellert and they were adorned with amazing tiles and statues in the Art Noveau style.  (Side note – As wonderful as the Gellert Spa is, I would recommend you not stay at the Hotel Gellert, but do visit for the spas daily).

The abundance of medicinal waters in Budapest is unparalleled even by international standards. The hot springs on the Buda side were used by the Celts and the Romans. Sulphurous water comes from the bore well on Margaret Island; most are called calcareous therapeutic waters and because of this water vein, the Hungarian baths are known to be every bit as good as the perhaps more famous Turkish baths.

Shy in our first visit to the baths and surrounded by locals who treasure this ritual, we did not want to break any rules and were respectful. Certainly, after a few minutes of sitting so comfortably in our first warm bath surrounded by the equally warm Hungarian people, we were very much at ease. The locals were eager to offer us spots to sit and point out the cooling jets if needed.

Across from our first soaking bath was the largest indoor pool I have ever seen, again adorned with fabulous statues and tiled walls. We found it unusual that swimming was only around the perimeter: nevertheless the pool was cool and offered a nice respite from the very warm therapeutic waters.

My husband swears that a cut he had on his leg for some time finally healed after soaking in the glorious waters. I am not convinced of the miraculous healing, but I will tell you that I felt like a million American dollars after soaking!

At the Gellert baths, there is also a very impressive outdoor wave pool. They claim that this is what started the wave pool craze throughout the world.  The waves were certainly impressively high and created quite a work out for the swimmers.

Each day this spa offers different options; we chose the “co-ed” day (offered on Sundays) so we could bathe together. On those days you are also allowed bathing suits because it is co-ed.  As an uptight American tourist, I cannot tell what a relief that was!

The museums of Budapest offer an inside glimpse of not only the culture of Hungary, but of the heartbreaking past that was not so distant. One such museum is the House of Terror, where you walk though the actual headquarters of fascists and communists. The permanent exhibit contains horrifying material on Hungary’s occupation by Nazi Germany and the Soviet Union. It also contains exhibits related to Hungarian organizations, such as the fascist Arrow Cross Party and the communist ÁVH, similar to the Soviet Union KGB secret police. The basement of the museum brings visitors face to face with the techniques the ÁVH used to break the will of their prisoners. More than once, I was moved to tears by the museum and the brutality inflicted on the Hungarian people.

Much of the information and the exhibits are in Hungarian, although each room has an extensive information sheet in both English and Hungarian. Audio guides in English and German are available. The music throughout the exhibit is beautiful and haunting, which adds to the experience.

Budapest is also very family friendly and chuck full of wonderful and comparably inexpensive activities for all ages. Riding the exciting Funicular Railway uphill is a perfect example of fun with the unique terrain. Once up the Buda Hills, walking around the Buda Castle area can be like playing in an action video game.  No doubt most castles like this have only been experienced virtually!

In addition, there are traditional circus performances with acrobats, animal tamers, clowns and more in the National Circus.  Circuses and puppet shows like those at the Budapest Puppet Theatre are favorite activities in Hungary and are performed expertly.

The Hungarian food scene ranges from very traditional cuisine with traditional gypsy music performances to super chic and expensive options from some of Europe’s young and hip chefs. I found Hungarian food to be heavy, but excellent, and spent a day of our trip learning how to cook it at chefparade in Budapest with the lovely and talented cook, Lilla Lekrinszk, www.chefparade.hu. Lilla took my husband and I through a traditional Paprika & Tomato stew called Tojasos lesco’, Sour Cherry Soup (Meggleves) and finally Madartej, commonly known as Floating Island. The entire class was about two hours and we enjoyed our creations as well as great conversation at the end. The cost was about $69 in U.S. currency and we even walked away with a few souvenirs.

Taking a class or two on foreign cooking in the land of the food’s origin is fun and very informative for home cooks/foodie types like us. In this class, learning to use excellent and somewhat “high powered” paprika, such as true Hungarian paprika, was in itself worth the trip. Hungarian cooks never just add paprika; they mix it first into a paste-like consistency and add it very slowly.  I also learned many more uses for this versatile ingredient. Much of Hungarian food starts with the gravy that is the base for the stew we made, as well as goulash. I am sharing this stew with you and you can use it as a base in any goulash-type dish you wish; with meat or just vegetables.

Getting around Budapest is pretty easy, but venturing out of the city is tougher and requires some pre-planning. Much of the transportation has not reached the level of other European cities. I am certain you will find more than enough to keep you busy in Budapest for a week without looking to the countryside for options and incurring travel issues.

Budapest and Hungary, in general, may not be the place to visit for a first time European traveler. It is certainly on the brink of capturing much more tourism, as time heals all the wounds and scars of a tragic past. For the seasoned traveler up for a few inconveniences, you will love it. Whether you are strolling through the city, attending one of the many concerts held in breathtaking churches or concert halls, attending the opera in their magnificent opera hall or gorging on history, Budapest is the emerging “must see” jewel of Europe.